Yep they are together in LA 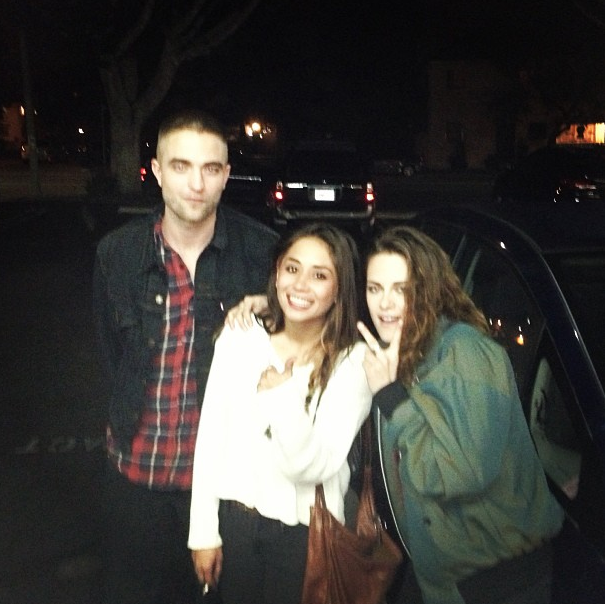 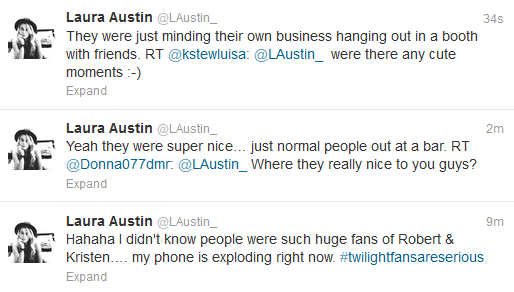 "My friend is a photographer so she is not shy about going up to people and asking for photos, so she just asked them for one," another fellow Ye Rustic Inn patron told us.

"Kristen was super nice," she said. "She was like ‘You know how many times I get asked that, no problem'. Rob was a little bit more shy. [Stewart] was like, ‘Come over here, Rob, don't be an a--hole.' She was laughing and put her arm around me. He smiled and took the pic. She was super friendly."

"They seemed really happy to be with each other," an eyewitness to the reunion exclusively tells E! News.


"Rob and Kristen were having so much fun together," the insider said. "They sat in the back of the bar in a booth and were laughing. At one point, they were standing at the bar and were just being normal, as any boyfriend and girlfriend would be with each other.


"They were touchy-feely. She was holding on to his jacket and had her hand on his back. They were just cute."

Makes you wanna do this:

So sweet. And of course the haters are crying big time lol:

" No seriously. My husband is a photographer and the second I saw the photo I knew it was photoshopped. Surely you can see the strange hand, strange expression on Rob's face and fact that he and Kristen are blurred. Where did the fan spot them ? I bet there is no narrative."

" Photoshop. That is why Rob looks like he is,on another planet. He was in Oz when this picture was taken. Why lie?"

3) The Picture proves that Robert is in LA and was out with friends last night. Where did you all think he was going to go? He has a house in LA and LIVES there.

4) To the person wondering about the Krisbian mentality. The majority of Krisbians appear to be older women who grew up in a time where admitting one's homosexuality was considered a sin...

Okay now that have that hilarity out of the way some really sad pathetic so called Rob fans: 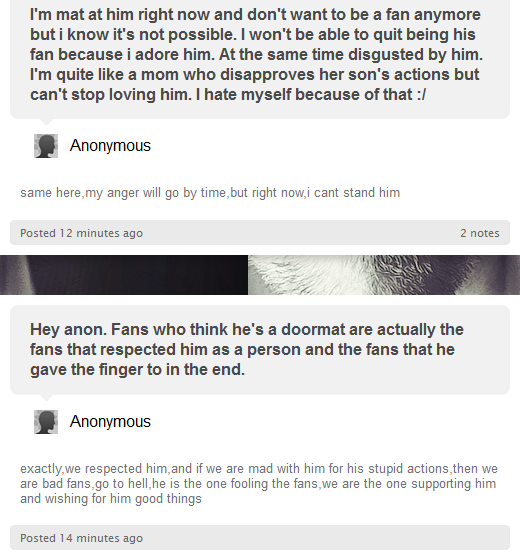 Message to these people. You are not and never have been fans of Rob's. If you were you would accept what he wants and not hate him for the choices he makes. Why is it so hard to accept that these two people love each other? If they weren't in a serious relationship they would have never made it past July. But they did. Because they love each other and want to be together. Its that simple. 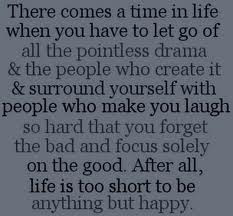 And I would like to give a big shout out to real pr pro for this twitlonger:

@SillyNonstens - The lunatic fringe does seem to have a bit of a problem with time differences and photographic evidence like shirts and beards.
Not to mention their total ignoranabout the economics of low budget movies that would mandate a wrap party be held the day shooting ends so as not to incur another day of pay and per diem for the cast and crew.
Although in this instance I am willing to grant a little bit of slack since Eonline's sloppy reporting did confuse the issue a bit. But there's confusion and then there's delusion - the difference being that confusion can be cleared up with a simple recitaiton of facts , whereas delusion is impervious to logic.
So I'm sure this next round of rationale thinking based on empirical evidence will do little to shake their convictions - but what the hell, let's see if they can follow along if we break it down into small sections.
The Rover ended production on March 16th.Wrap party is held that night at the Marree Hotel.
How do we know the location? Well, if you look at the photo of Scoot as well as the photos of Rob from the event
(http://theroverfilm.com/)
you can see the hotel's distinct brickwork
(http://bush-sweepers.org/image....
It shows through the window in the Scoot shot and between the chef and Rob's heads in their shot.
(Hey, you spend 30 years reiewing contact sheet thumbnails with a photographer's loop and you develop an eye for the background details.)
Why does it matter where the wrap party was?
Well, take a look at the picture of Rob and the chef again, in the right hand corner you can see the same wooden slats siding that also appears behind Rob in the picture that fansites had tagged as March 17 - the one where his fresh stubble shows that it was clearly taken after the wrap party, he's wearing a black plaid shirt, and appears to be carrying a bag of some sort.
(http://www.imagebam.com/image/....
This is the shot that that Eonline claims was taken on March 19th. But this is obviously still the Maree Hotel - not Adelaide as Eonline reported, which is about 366 miles away from Maree.
Now let's for a minute ignore the fact that the pictures were clearly labeled March 17. Let's pretend we didnt know when they were taken. Ignoring the previously published date and even ignoring the tweets from three apparently rationale sources - inlcuding a non-vested party - does it make sense to think that after spending three weeks in Maree - a town with a population of 70 and oppressive heat-- Rob would want to hang around hung around Maree for ANOTHER THREE DAYS after shooting ended?Really?RR
Take a look at the picture of Maree's main drag and tell me how that's believable.
Doesn't take a rocket scientist to figure out that not only is the picture in question indeed from March 17, it also most likely is Rob exiting the Marree Hotel for the drive or airvan trip back to Adelaide - if driving, its a trip that is equal to driving from LA to San Francisco, and takes about 7 hrs on good highways.
Based on a fan account, it sounds like he spent Sunday evening having a few beers with a crew member and his GF in Adelaide.
Now going back to those credible accounts of his being on the 10:30 am flight out of Melbourne on Monday Morning (which would be about 4:30 pm Sunday afternoon in LA) and absent any credible photographic or verbal accounts of his still being in Australia, the reasoable conclusion is that after spending most of Sunday getttin to Adelaide, he caught the early morning commuter from Adelaide to Melbourne and then got on Quantas flight to LA 93.
(For those who suffer from TZCDD -time zone conversion deficit disorde -- the time difference in this instance would mean that he left Melbourne on Monday 3/18 morning at 10:30 am and actually arrived in LA 4 hours earlier on the same date.)
Any questions?
Tomorrow we will take on the Grassy Knoll and OJ's travel schedule the night Nicole was murdered.
BTW -someone just sent me a very similar analysis of the timeline in question that was posted on GC but i'm going to tweet this anyway since a lot of you don't like to go over their without your hazmat suits.


And right about now Rob and Kristen are doing this:

Just come up for air once in while and give us some cute pics now and then. Thats all we ask ! 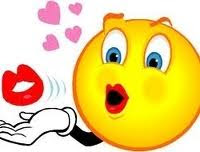 Posted by Hatersknownothing at 2:33 PM

I like your strong attitude since last July. Stand firm on what you know just like your name. Cheer for nice indie. Aims

Is Rupert directing swath2 anyone??

@anon 2:38,As of right now he is not signed on to direct SWATH 2. Blessings from God is all I can say on that one.

Thank god that was a worry for me

Can someone please help me and keep my sainty and tell me that if they are together or not because I was at the kca red carpet and I heard lots of people saying she looks great for a post break up??? Please help me??

@anon 6:28,apparently you missed most of last week,because Rob has returned home and we got our first pics of him and Kristen enjoying themselves at Katy Perry's assistant's birthday party. They are still very much together. So I don't know what those people were talking about or they're just sour grapes that Rob and Kristen still deeply love each other and the "scandal" didn't destroy them. I hope this puts your mind at ease.

You were at KCA red carpet??? Really??? ahaha, I'm the Quenn of England, lol.